The Indian Journal of STEAM invites technical papers or case studies or review article from authors of various streams of innovation and research in the areas within the scope of the STEAM. Manuscripts are accepted throughout the year and there is no deadline for submission. Manuscript should be sent by email to: [email protected].

Once the manuscript is accepted after review, it will be considered for publication in the subsequent issue.

D Y Patil Technical Campus was established in the year 2006 with aim of providing UG/PG education in the fields of Engineering & Technology, Pharmacy, Agriculture, Management and Architecture. More than 7000 students are pursuing their higher education in various disciplines within the campus. In a span of 13 years, the campus is transformed into “D Y Patil University”, a state private university approved by Government of Maharashtra and all statutory bodies of respective programs.

In providing a unique platform facilitating researchers and students of multidisciplinary areas, D. Y. Patil University Pune Ambi hosts publication of Indian Journal of STEAM. It is an ideal platform for “Innovation & Research” in various disciplines under one umbrella. It is strongly believed that removing barriers to access technical papers online greatly influence the transfer of knowledge worldwide at a greater scale. It also serves as a value added input to the potential researchers to present their innovative ideas to the aspiring researchers in science and technology, arts and management disciplines. Thus STEAM represents excelling the growth of technology in various disciplines.

The Indian Journal of STEAM, provides a broad-based platform for Innovations & Researches in various streams. The Journal is the initiative of the students and research scholars of D. Y. Patil University Ambi Pune to have the broad based platform for publishing research work or case studies or review article of different disciplines and it is a journey towards consilience in a way of interdisciplinary approach.

The focus of Journal aims:

II) To provide easy accessibility for publishing with rapid reviewing to disseminate the articles for teaching, research, and reference purposes. In today's world of quick information availability globally at the click of the button. The Indian Journal of STEAM gives an open access worldwide to reach readers on larger scale than that of any other subscription-based journal. The published papers in Indian Journal of STEAM increases the visibility and impact factor.

1. Type of Papers published: Paper should be of sufficient novelty and not published or under consideration of publication anywhere else. It may be of research article or case studies or review type in nature. The Author Guidelines and paper template is provided in journal webpage.
2. Plagiarism: Manuscript is checked for plagiarism. Similarity index should not be more than 10%.
3. No. of issues: It is published quarterly, there are 4 issues published per year.
4. Publication charges: Open access publication charges are 150 Rupees and 500 Rupees for UG and PG/Ph.D scholars respectively. The payment of fees is accepted only if the paper is accepted for publication after single blind review process. If the authors demands print version of the issue, it is chargeable extra as per the prevailing expenses incurred.
5. Call for Papers: The manuscripts are accepted throughout the year. Manuscripts are called by editorial board members through email and Journal web page.
6. After submitting manuscript to the Journal : The chief Editor will assign Editorial board members to the manuscript received based on its scope. All the manuscripts submitted undergoes single blind review process. If any conflict of interest, corresponding author should clearly mention while submission. The manuscript goes through initial screening by the editor about its novelty. If it lies within the scope of the Journal, suitable reviewers are assigned. The manuscript is forwarded to the reviewers (mostly two) with instructions of the review process. Within Fifteen days, reviewer submits his/her comments to the editor. Based on the reviewer comments, editor decides about publishing it in the current issue or next issue. Before the paper being published, authors should submit copyright duly signed.
7. The journal is indexed in most of the indexing sources. The list will be provided very soon.

Following guideline are to be followed while submitting article to journal: Examples:

Abstract :  This study has been undertaken to investigate theAbstract should be written up to 200 words and it should focus on the main theme of the work along with important findings. It becomes most important to study the vehicle vibrations for human body comfort. The model fabrication is done on the basis of comparing real human body parameters with human physical models used in the ISO 10068:2012 standard. This article revealed effect of vibration transferring to the specific parts of human body due to vibration transferring from Seat to Height (STH) and from Hands on steering. The focus of the present study was to determine the vibration output from fabricated model. T he vibrations as input to the model are from automotive vehicles. The input verses output vibration characteristics will be useful to study effects of vibration on human health. The human body is considered as a simple spring, mass, damper system for analysis. This multi body model representative of the automotive postures found in the literature were investigated, one with and the other without a backrest support. The model was modified to suitably represent the different automotive postures with and without backrest supports, to the same postural conditions on the basis of the analytical study. The prepared model has been further compared with similar model provided in the literature on automotive sitting environments.

Page size: A4 size only

Font: Use Only Times New Roman for whole paper

All manuscripts must be in English. These guidelines include complete descriptions of the fonts, spacing, and related information for producing your proceedings manuscripts. Please follow them.

This template provides authors with most of the formatting specifications needed for preparing electronic versions of their papers. Margins, column widths, line spacing, and type styles are built in; examples of the type styles are provided throughout this document and are identified initial type, within parentheses, following the example. PLEASE DO NOT READJUST THE SEMARGINS. Some components, such as multileveled equations, graphics, and tables are not prescribed; although the various tablet Ext styles are provided. The formatter will need to create these components, incorporating the applicable criteria that follow.

Mechanical vibrations generated by vibrating systems of power tools or transport vehicles can have a negative impact on the human body. Long-term exposure to vibrations can cause many disorders in the operator’s body, leading to MB model of consist of several rigid bodies interconnected by bushing elements (rotational and translational spring-damper units), pin (2-D) and/or ball-and-socket (3D) joints. The 3-D model is designed and fabricated by comparing specifications. Then used in the study of biodynamic responses of the human body. For the responses of a seated body exposed to vertical vibrations, mathematical models was at least 2-D in the sagittal plane. Especially in an automotive seating environment, bouncing and pitching motions are the important factors in vehicle riding assessment. As a result (shown in fig number 1), a few 2-D models reaches minimal satisfaction of the mentioned body.

As mentioned earlier, from a few years several mathematical models for the study of biodynamic responses of a sitting body are printed on the idea of individual take a look at knowledge. As part of this study, the basic assumptions and experimental data for the analysis of seated humans exposed to vertical vibrations will be studied first. Moreover, MB model, having fourteen degrees of freedom (DOFs) will be illustrated and summarized in this section of study [4].

A variety of test data used to categorized the biodynamic response functions has been established by using different variety of testing conditions, most of which can be grouped in the data sets for a seated body without back rest support. Such grouping has resulted in considerable discrepancies among the data. To avoid these deficiencies, a primary conclusion was reached that any attempt to define generalized values might not be correct unless it could be defined specifically for a particular application or within a limited but well-defined range of situations. From the literature, data sets satisfying the following requirements were selected for the study of biodynamic characteristics of seated human subjects [5].

Body masses were limited to the range within 49–94 kg;

The feet were supported and vibrated;

Data sets tested under vibration excitations were exposed to the vertical direction;

Vibration excitation amplitudes were below 5 m/s2, the nature of excitation being specified as either sinusoidal or random;

The excitation frequency range was limited to 0.5–20 Hz.

In this study only the STH transmissibility data were selected to validate the targeted MB models to avoid comparisons of the response function from simulations, and data is compared with data of Experimental results: seated human body exposed to vertical vibrations without backrest support from Cho-Chung LIANG1 and Chi-Feng CHIANG1.

Because of associate in nursing, incomplete information of the mechanical properties of the body, the effect of hand positions and body mass on AP mass is difficult to determine. This research studies only on the effect of the backrest angle on the biodynamic response functions. The AP mass values measured at three different back-support positions, representing a flat pan with the back unsupported, and with the back supported by a vertical backrest or an inclined backrest as mentioned in Cho-Chung LIANG1 and Chi-Feng CHIANG1. 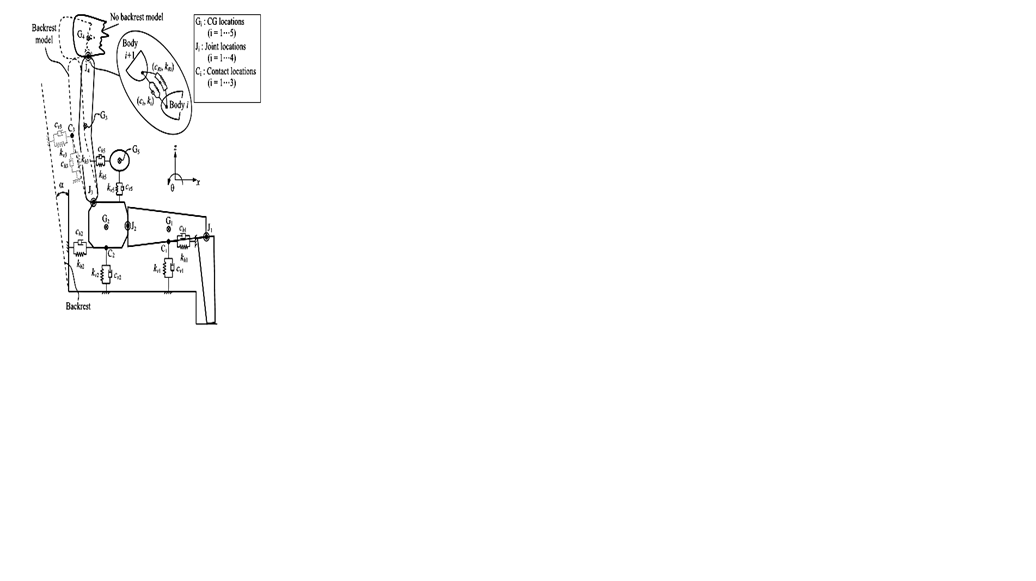 As previously mentioned, the experimental studies on the biodynamic of a seated human body exposed to vertical vibrations have been widely assessed in terms of STH transmissibility, DPM impedance, and AP mass. Moreover, the support in automotive seating environments contributes to decrease muscle tensions and maintain sitting posture throughout driving.

Where [M], [C], and [K] are the 14 × 14 mass, damping and stiffness matrices, respectively; {q} is the vector of generalized coordinates; {fE} is the force vector due to external excitation. By considering model as a simple spring mass system with certain assumptions derivations for following measurements were derived.

(a) Measurements without backrest support

(b) Measurements with backrest inclined 21°

A study of MB models of a fixed human body on a platform which is exposed to vertical vibrations has been implemented. The model proposed in this study has been analyzed in terms of STH transmissibility.

From the analysis following comments can be made:

For responses of a seated body exposed to vertical vibrations, the models must be at least 2-D in the sagittal plane. Therefore, the MB model in this study was observed when sitting both with and without backrest supports, irrespective of hand positions, while the feet were supported and allowed to vibrate. In the biodynamic analyses both models were simplified to linear systems to reduce the analytical and simulation complexities.

The proposed model is fit in different automotive sitting environments very well. It is recommended that the proposed model be used in evaluations of the biodynamic responses of a seated human body exposed to vertical vibrations in various automotive postures